Past Life Resolution is a dynamic new system I’ve developed to take Past Life work to an entirely new level.

This revolutionary modality combines the technique of Past Life Regression, which I was originally trained in back in the 1970s, and several other powerful systems to assist my clients to not only discover the core Past Life roots of an issue, trauma, or problem, but also to  heal and gain resolution at the deepest levels.

It’s safe, simple, and the benefits are magnificent!


Sandee Mac on Past Life Resolution

This is a condensed demonstration of
Sandee Mac conducting an actual
Past Life Resolution Session. (17 mins) 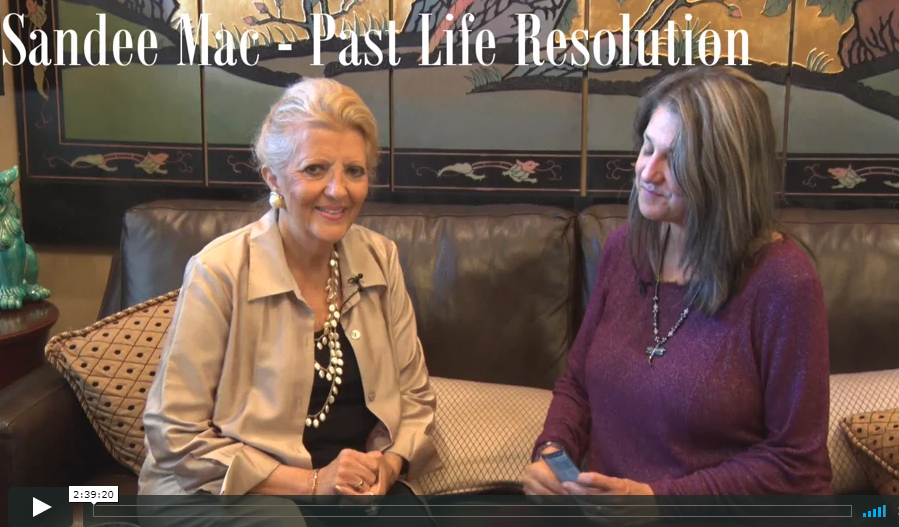 This is the original full version for those who want to watch the whole process. (2 hours 40 mins)

Remember a few years ago when ...

Actress Shirley McLaine released her best-selling book “Out on a Limb”? The idea of reincarnation and Past Life work exploded onto the scene of mainstream America. Lots of questions, lots of controversy, lots of opinions, and more was provoked. Since then, it seems to be a topic far less shocking in conversations. Granted, there has always been a segment of the population for whom these ideas are commonplace.

I think I first heard of the concept of reincarnation and past lives from my parents who were reading some of the Edgar Cayce material in the 50s and 60s. Looking back I remember having seen abject poverty and suffering in Texas border towns, while still being told everyone is equal and anyone who wants to, could become President. My young mind simply could not compute, let alone buy that idea. How could these people, begging in the streets, possibly compare with the privileged life of someone like the Kennedys? I don’t remember hearing the word “KARMA” but a simple explanation was that someone with severe stomach problems might have been a glutton in a different time and place. Now that actually made sense to me, and I could look at genuine suffering with some logic as well as compassion.

Fast forward a few years, after these early seeds had been planted. In the 70s, after returning to the US from four years living on a tiny Mediterranean island, I read a book that created another curve in my life’s journey. “Born Again to Be Together” was written by Dick Sutphen about some of his original research on Past Lives. He pioneered the idea of using hypnosis to do group Past Life regressions. The stories amazed, fascinated, and inspired me! I had previously worked in a psychiatric facility and was absolutely intrigued with the possibility of using this technique therapeutically. Dick Sutphen was in Scottsdale, Arizona at that time; I began to attend his seminars, and was in one of the first groups he trained to do Past Life Regression work. I was thrilled, because after years of seeing a choice of almost endless and hopeless “therapy” or turning mentally ill people into shuffling zombies, there was hope. I had witnessed far too much of people being poisoned with an array of psychotropic toxic drugs, basic warehousing or worse, so the possibility of other explanations, or even options for real change, was magnificent. WOW!

What if someone with a severe fear of water, did drown in another life? What if … after some basic Past Life therapy, the fear was gone, never returned, and they could actually enjoy swimming? A revolutionary idea, and I loved it! My criteria was simple … I wanted to help people make significant and powerful changes, quickly, easily, have it show up in their real daily lives and have it last. No Woo-Woo stuff … just real change and real results that make a difference. Thirty years and several thousand clients later, I can now answer some of the questions most people might ask.

I trust these have answered some of your major questions and hope they have triggered even more. I consider exploring Past Lives a very useful, valid, and powerful tool. Use it to not only learn more of who we are and our circumstances, understanding others, but getting resolution to things that no other modality can begin to offer. I continue to find innovative ways to use it to help others get insight and make lasting change in their lives. Over the years I’ve discovered lots of shortcuts to get these answers. Like all powerful tools, Past Life work can be used or misused and requires responsibility and discernment. On this planet of duality, and on our own personal spiritual journey, Past Life work can certainly take us far.

To make an appointment, click the contact button and send an email or visit other service pages: